End of an era as Falklands Islands maritime leader steps down

Forty years working within the maritime sector has come to an end as Captain Chris Locke steps down from his role with the Falkland Islands Government.

Chris has been the Marine Officer and Harbour Master for the Falkland Islands Government for the past five years, working to help improve seafarers living and working conditions as well as making important changes to local maritime legislation.

Chris is now handing over the Maritime Authority batten to a new team, as he prepares for retirement. Chris said: “The Falkland Islands and the waters around the Islands have been in my life ever since I was eighteen years old. I’ve been so proud to live and serve in this community and proud of what we’ve achieved.”

Throughout his seagoing career the Falkland Islands have been a significant part of his life during which he has returned to the Islands on many occasions predominately on the Rover Class Tankers and in particular, RFA Grey Rover.  In 2012 Chris took up the post as the Queen’s Harbour Master at East Cove before leaving the RFA and taking up his current position as Professional Head of the Maritime Authority.

Chris’s team also worked closely with legislative drafters on the introduction of Maritime Ordnance 2017 which was the first major updating of the FI Merchant Shipping Acts for over a century. The registration of the Sir David Attenborough under the Falklands Flag has also been a significant achievement. 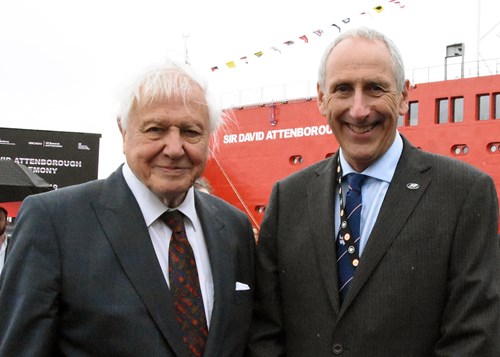 Alongside the modernisation of maritime law, Chris has worked with industry and the Port Welfare Group, to highlight and improve seafarers working and living conditions aboard both foreign and Falkland flagged vessels trading within Falkland waters.

Chris said: “The past five years have been a demanding yet exciting period which has built on the good work undertaken by my predecessor Malcolm Jamieson.  Although there is still an enormous amount to do in implementing primary legislation, what has been achieved has been a positive and significant step in the right direction.

“I am sure the building blocks for safety within the Falklands marine sector will continue to grow and would like thank industry for their support in helping this vital part of the Authority’s responsibilities be undertaken. While it was never going to be straightforward, I am convinced the Falklands maritime sector has never been in a better place to take things forward as compliance with the International Maritime Organisation’s Instrument and Implementation Code becomes a reality. “

Earlier this year he brought the Red Ensign Group Conference to the Falkland Islands for the first time in 15 years, co-chairing it with Katy Ware, Director of Maritime Safety and Standards with the Maritime and Coastguard Agency, and the UK’s Permanent Representative to the International Maritime Organization.

Katy said: “It was a great Conference, one I’ll never forget and much of that was down to the organisational skills of Chris and his team. His hospitable welcome to all of the delegates and the way he completely put us all at our ease, brought a wonderful atmosphere to this year’s Conference. We’ll miss him and his wife Nancy and I wish them both all the very best for the future.” He said: “Chris has been instrumental in raising the profile of the Falkland Islands flag administration and the REG is extremely grateful for his insight and input to the group.”

Chris said there were people that he was particularly grateful to including fellow members of the Red Ensign Group, as well as his own team.

He added “I would particularly like to thank my deputy Jonathan Poynter for his dedicated support and hard work and Piers Baker, our maritime consultant, for his guidance and oversight. I wish the new Falklands Islands Maritime Authority team all the best for the future as they continue to evolve and develop the authority’s position.”

Chris says he doesn’t intend to end his links with maritime: “I’ve always wanted my own sailing boat,” he added. “With a bit more time on my hands, this will be the moment I can look to realise that ambition - so I’ll still be seen out and about on the water.”