REG Yacht Code under the spotlight in Amsterdam

Technical experts from across the Red Ensign Group have been engaging with industry on the REG Yacht Code.

Chaired by Julian Smith from the Cayman Islands Shipping Registry, the two-day event was held at the Superyacht Builder’s Association (SYBAss) in Amsterdam.

Julian said: “These events are real opportunities to discuss standards of safety and pollution prevention set out by the REG Yacht Code.”

The first revision of the Yacht Code was published in 1997 and prescribes standards of safety and pollution prevention which are appropriate to the size and type of yacht. The REG continues to engage with industry over proposed amends in sessions like the one at SYBAss. 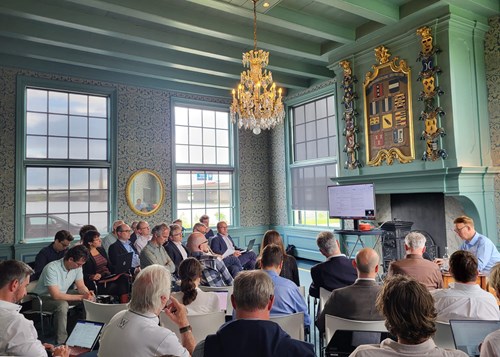 Phil said: “The first day focussed on large yachts and the second on passenger yachts. It’s good to meet with industry to hear their views on proposed amends to the Code and discuss how we can work together for good on both sides within the International Conventions.”

Adam Jackson said: “The standards applied are set internationally using the conventions set out or by equivalent standards where it isn’t reasonable or practicable for yachts to comply. Safety for the REG is non-negotiable and the industry knows that which is why the Yacht Code remains such a benchmark standard across the world.”

Carlo Vinelli said: “This was a really lively event. Engagement with the industry on proposed amendments due to changes in not just the International Conventions, but things like technology and design trends is essential to keep the REG Yacht Code at the forefront of the industry where it belongs.