'We will step forward with confidence': REG Conference 2016

Members of the Red Ensign Group have been meeting in Portsmouth for the annual REG Conference to discuss challenges and agree the way forward for the group.

For the first time since 2004, the Conference was hosted by the UK and chaired by Sir Alan Massey, Chief Executive of the UK Maritime and Coastguard Agency, and welcomed delegates from the UK Overseas Territories and Crown Dependencies which operate British Ship Registers.

The Conference acts as an important forum to establish common policies and direction across the thirteen British ship registries represented. Statistics presented during the Conference demonstrated the continued strength of the 'Red Ensign' flag, with the combined size of the British registered commercial fleet currently standing at 48,839,939 gross tonnage to remain one of the largest fleets in the world.

The group committed itself to use of its combined strengths and common ideals to influence the maritime world and to step forward with confidence into the next decade. 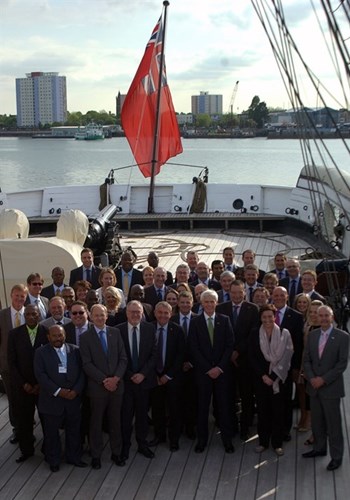